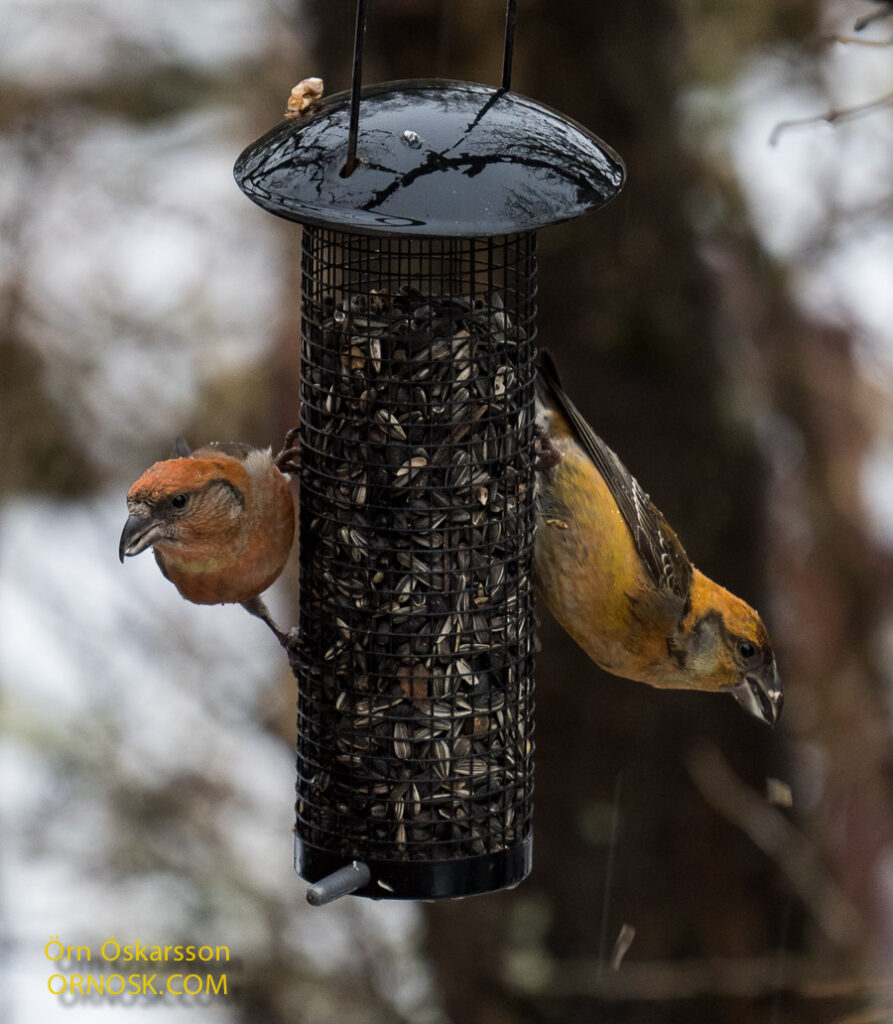 For the fourth time a Black-and-white Warbler is reported in Iceland. This very tame little bird was spotted in a garden near Lágafell in Snæfellsnes Peninsula. It has been there for more than a week now, first spotted June 10. 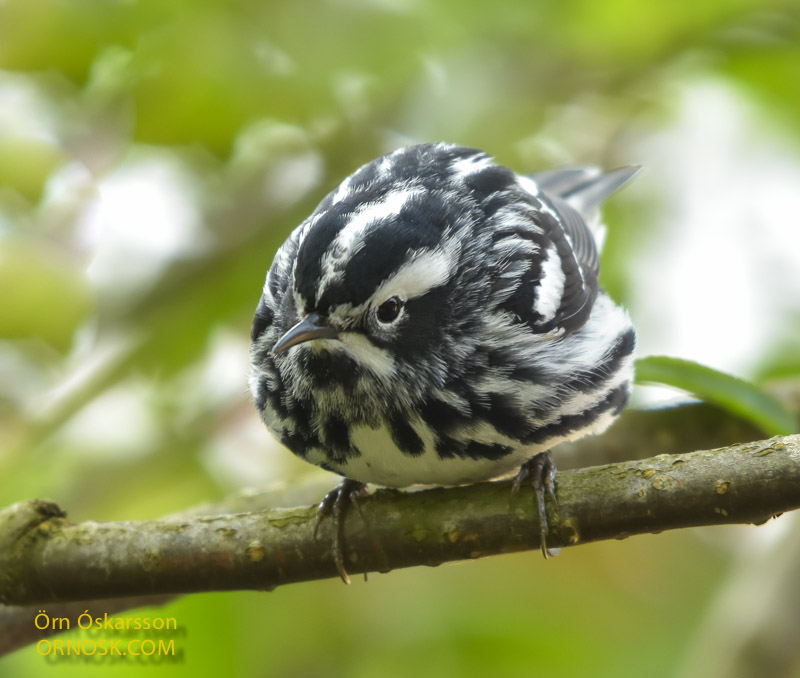 The Black-and-white Warbler is a breeding bird in North America, migrating south to the Caribbean Sea and South America in winter. It makes its nest on the ground but spends most of its time picking insects from the limbs and leaves of trees. 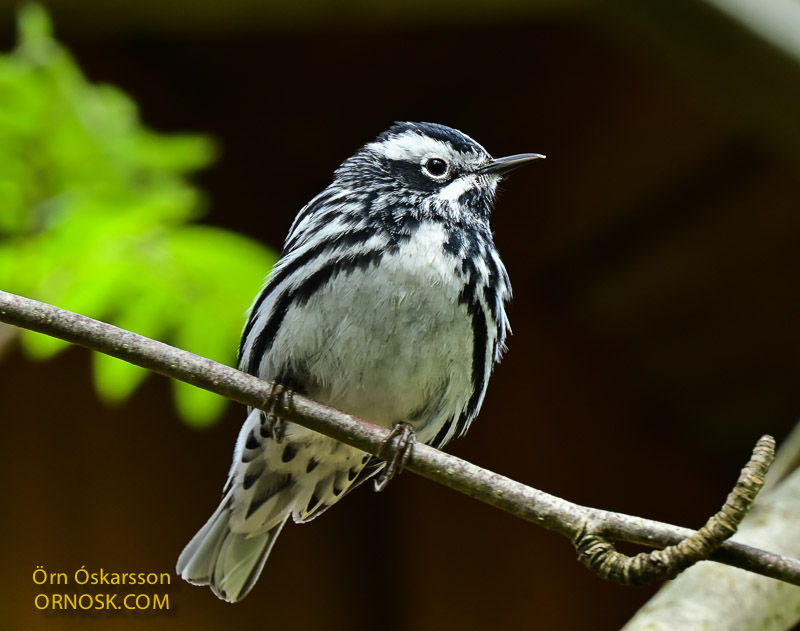 The Black-and-white Warbler in Snæfellsnes Peninsula is very tame and has not been disturbed by the excited birders that have visited the area with their great big lenses.

Today, June 10, a partial solar eclipse is visible from Iceland, where weather conditions permit. It started at around 9 o’clock am and was visible until around 11 o’clock am.  This picture is taken a little before 11 o’clock in Selfoss when the sun could be seen through a layer of clouds.

A Moorhen was staying at the pond in the center of Hafnarfjörður for about four weeks in March. This was probably a nice surprise for the ducks, geese and swans that have permanent residency there. 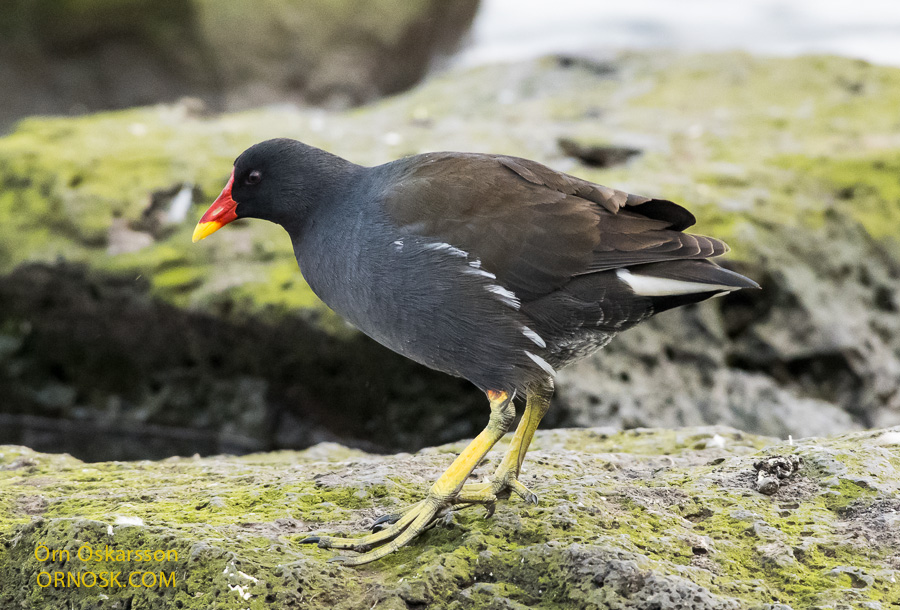 Moorhens are rare vagrants in Iceland but very common in most of Europe, Asia and some areas in Africa. 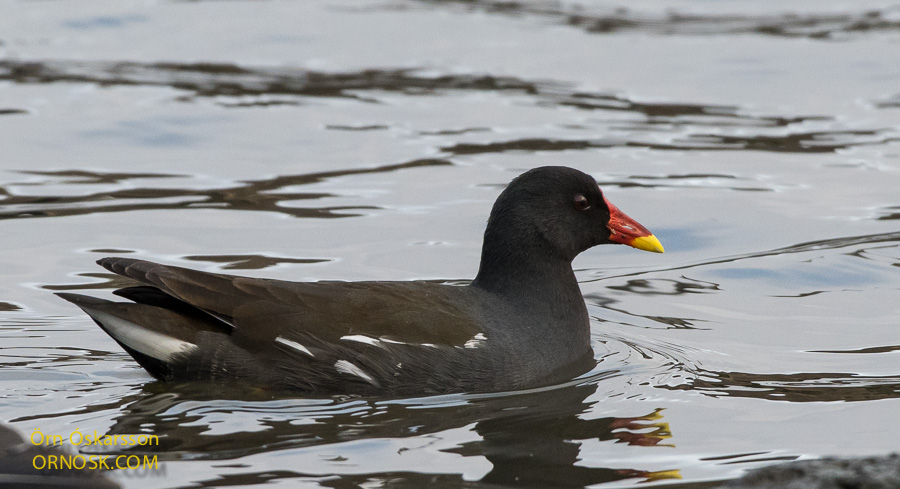 The Common Moorhen is very common in marsh lands, lakes and can even been seen in parks in cities. In areas that freeze in winter they migrate to more temperate climates in summer. 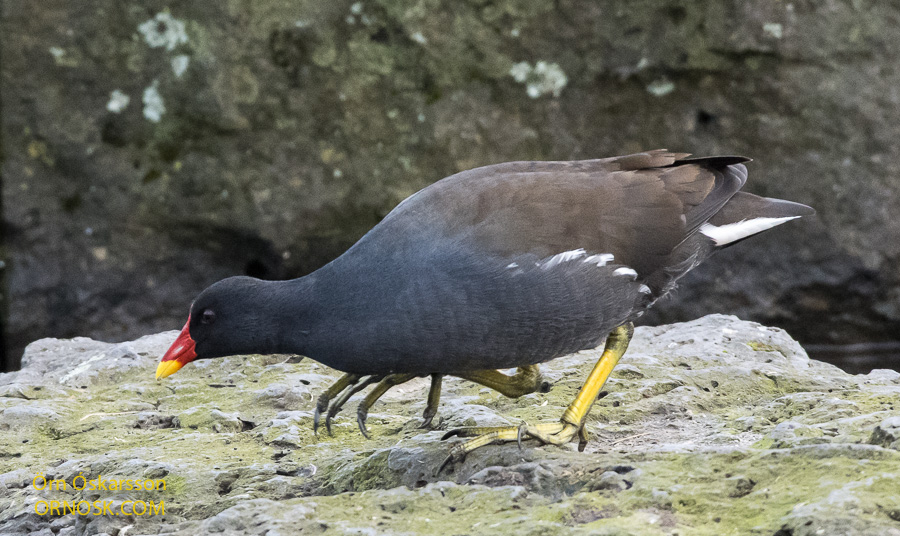 We had heard of a Waxwing being seen in Selfoss and when one appeared in our garden on February 1st we had actually been waiting for it. The Waxwing has now been with us for about five weeks much to our delight. This beautiful bird is in competition with the other birds that occupy our garden, i.e. Starlings, Redwings, Fieldfares and Blackbirds, and the Waxwing does not give in easily.  Apples is the item on the menu that they all crave, as well as the sunflower seeds, so there is sometimes a lot of commotion. 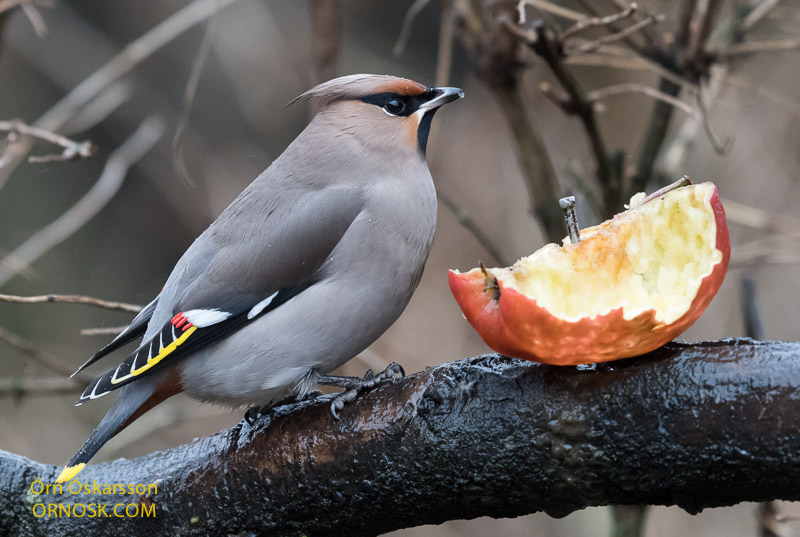 The Waxwing is a vagrant in Iceland and this one probably came to to the country in the autumn from Scandinavia.  Waxwings have been known to breed on and off in the last few summers in North and Northeast Iceland. 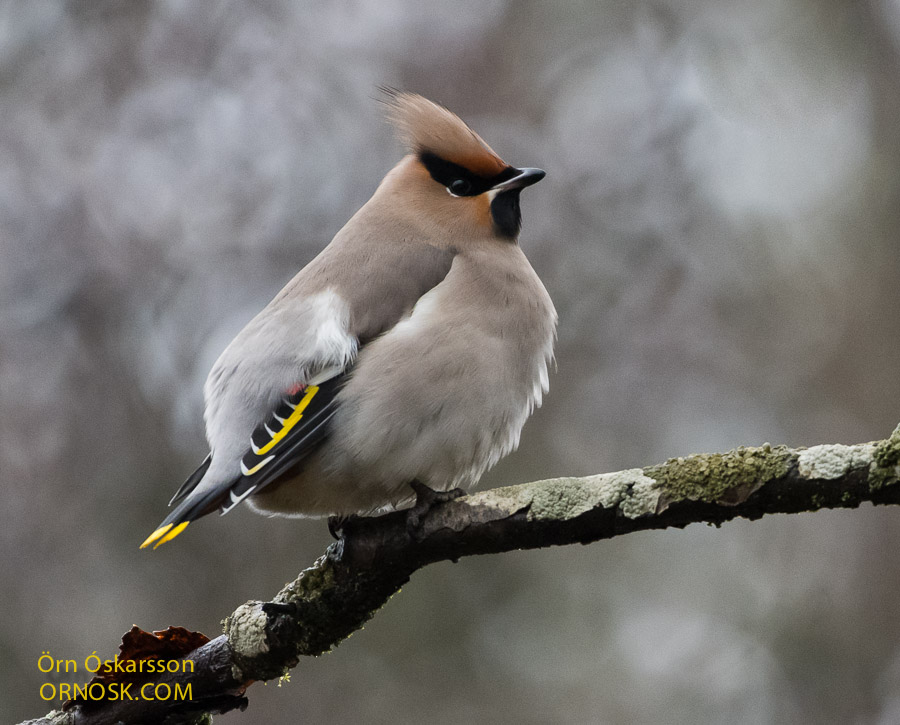 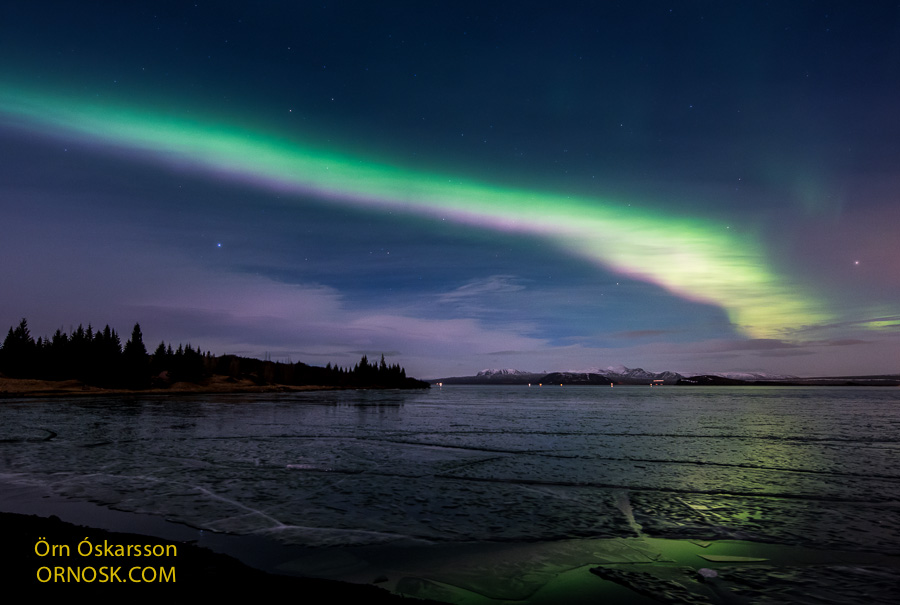 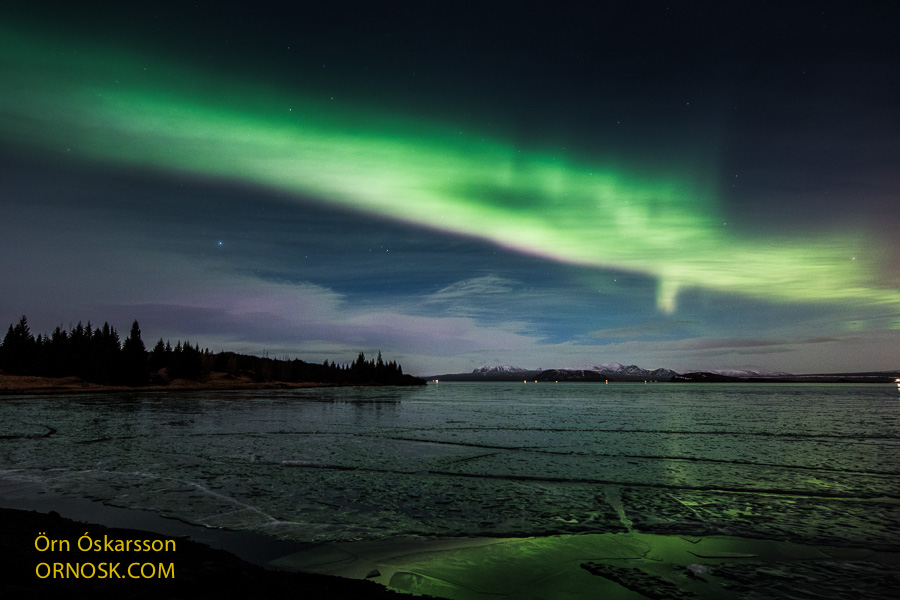 Now when the sun has started climbing higher in the sky and spring not so very far away, the Starlings have begun to sing and their plumage is becoming more colourful. 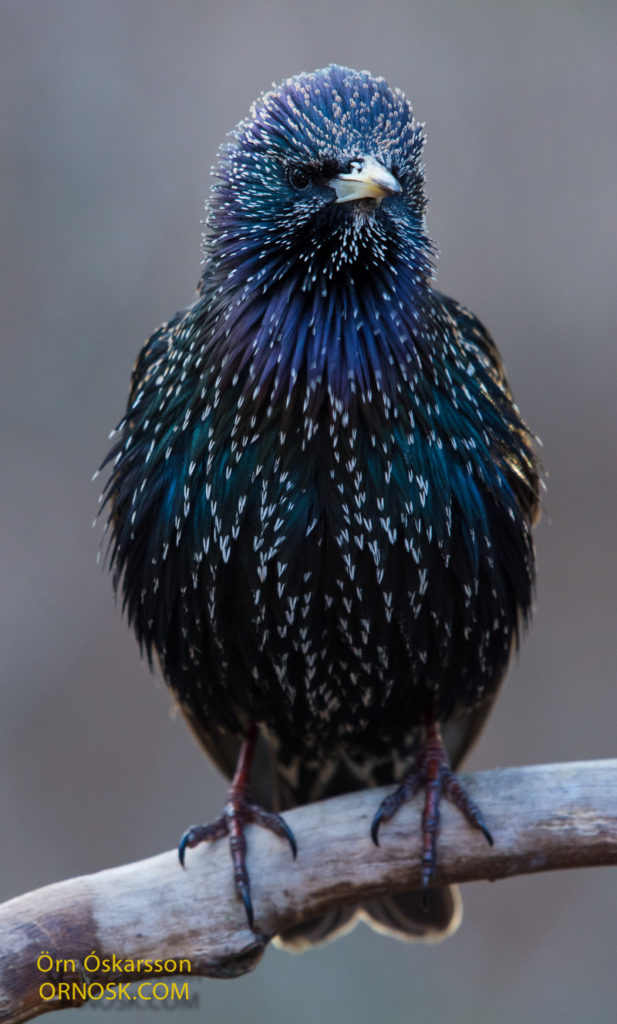 Although February has just started and temperatures below zero every day, they have begun to claim territories with their song. This Starling male has great expectations for this spring and has started to defend part of the garden as his own. His task is a difficult one as there are flocks of 20-30 Starlings here every day in the feeding trays.  But he doesn’t give up. 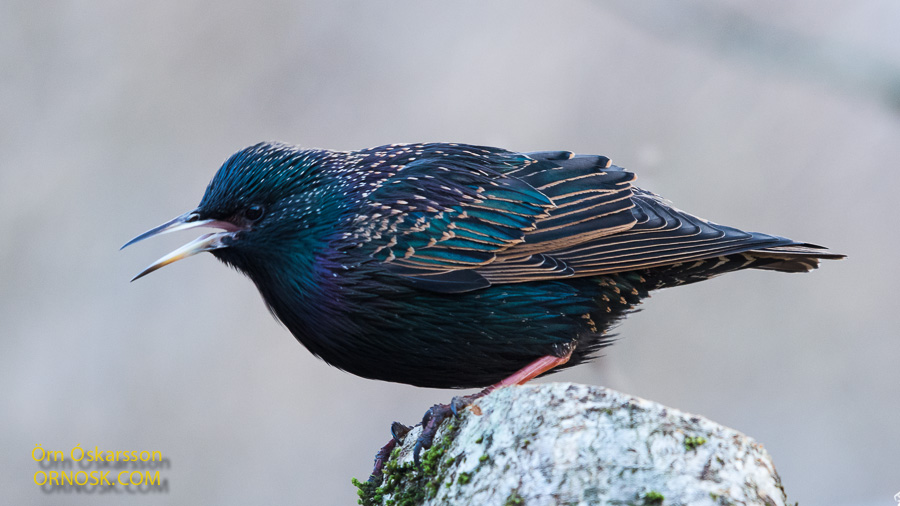 Unusually many Redwings come to the garden this winter. They have been up to 30 for the past few weeks. Apples and sunflower seeds are their favorite foods.

A few years ago we noticed a pair of Swans that were different from the Whooper Swans that usually breed in Veidivotn Lakes in the Southern Interior of Iceland. Since then we have been observing the pair that comes back to the same lake to breed, raising two to three chicks every summer.

The Whooper Swan is the only species that breeds in Iceland but these Swans in Veidivotn Lakes are smaller, more delicate and have a black bill without any or little yellow. They are also quieter and not as shy.

Some speculation has been ongoing concerning the identification of this breed of Swans, without any definite result. They are similar but not identical to either the Bewick’s Swan or the Tundra Swan. According to ornithologists they are possibly a local genetic aberration from the Whooper Swan. 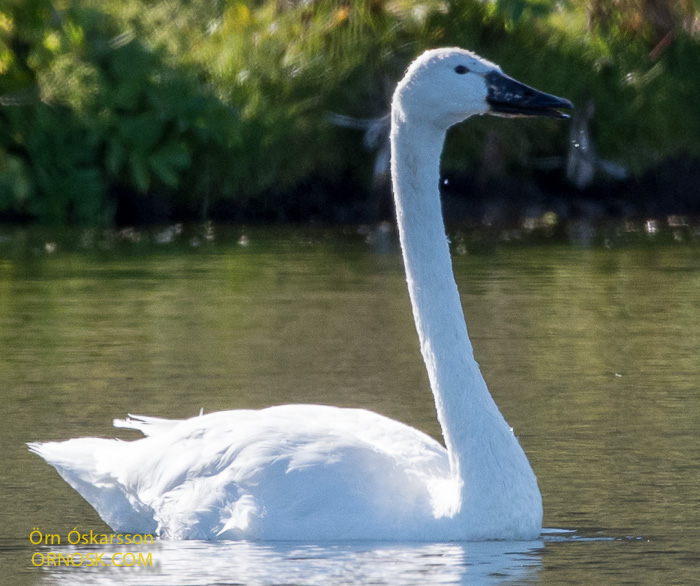 On a field trip last summer seven Swans like these were found in the Veidivotn Lakes area, three paired with ordinary Whooper Swans and two where both had these same characteristics. Whatever they are we will continue to observe them and see how they fare.