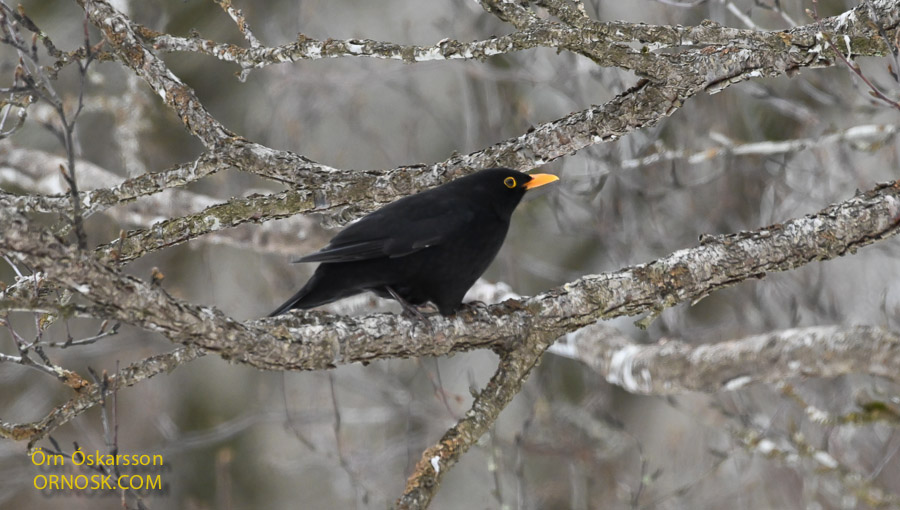 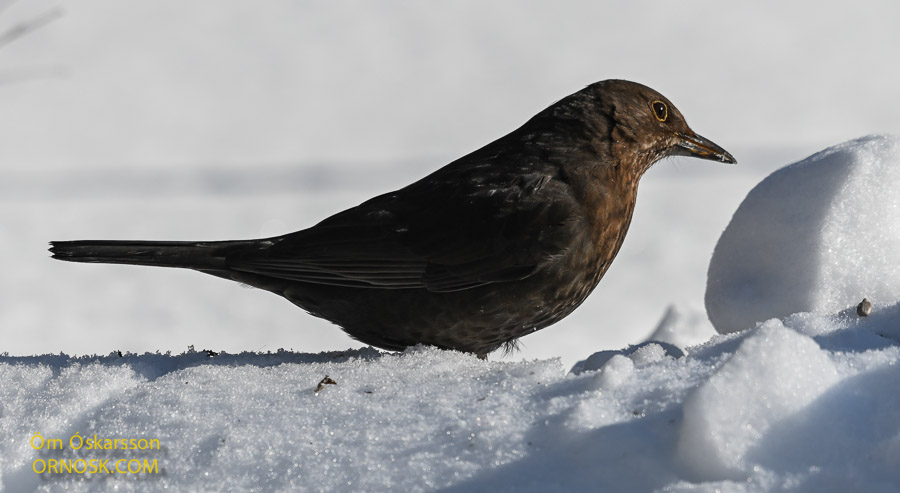 Blackbirds have thrived in Iceland this winter. They are newcomers and the mild weather has been exceptionally favourable for them. However, this past week has been quite different. Up until now they have been able to pick earthworms and larva from the frost free ground. Now there is a lot of snow and a full blast winter has arrived. We thought we would have a very mild, almost snowless winter and the Blackbirds had already started singing. By mid February the group that was here earlier had already gone,  leaving only one pair that had claimed our garden as its territory.  Now the group is here again searching for food which of course we are sure to have enough of. There is no indication that the weather will change soon so we continue to feed the birds and enjoy the Blackbirds that look so picturesque in the snow.

In the last few days a Blackbird couple have been very busy in the garden. The male stands watch, intermittently  singing his soul out, as the female searches for nesting material. She is busy gathering  last years grass, rotting leaves from the gutter and moss.

Placing  the material diligently in her bill she flies up into a spruce where the nest is carefully hidden from bad weather and possible enemies. Soon she will lay her eggs. Several Blackbird pairs are in Selfoss now and usually each pair breeds up to four times during the summer time. We can expect the Blackbird stock in Selfoss to have grown considerably this autumn if things go as planned.

Blackbirds are becoming the most common garden birds in the winter time at least in some areas. In the garden we now have 12 Blackbirds all in search of food. Some are becoming quite tame and are not disturbed by my camera when I take photos of them. Today eight Blackbirds were in the garden hopping around in the leaves looking for food or picking berries from trees and shrubs. They seem to know of the frost and snow predicted in the next few days. Blackbirds are becoming more and more noticeable in Iceland. They started breeding in Reykjavík in 1991 but in the last few years they have spread around the country and now they breed in many places.
In Selfoss breeding was confirmed three years ago and their numbers are growing.

The Blackbird pair in the garden usually breeds four times every summer. The first breeding is in April and the last one in August. This summer the couple has bred three times. Raising the chicks is a difficult job, the cats in the neighbourhood stalk them and most of them are eaten.  One chick from the June breeding (photo) is alive and two small chicks from the July breeding. We hope they will survive.

The first chicks this spring have hatched and jumped out of the nest.  This morning we saw a Blackbird chick with a very short tail, it was hopping around and trying its wings. We hope that it will not fall prey for the cats that regularly visit the garden.

This is one of the male Blackbirds that was here this winter and perhaps the father of the chick we saw this morning.

This Blackbird is one of a group of eight Blackbirds that are in the garden now. This is a young male which can be seen from the dark brown colour and the colour of its beak, similar to the female’s colours.

When it grows up it becomes black and the beak becomes bright orange-yellow. It also gets an eye-ring of the same colour.  This makes the adult male Blackbird one of the most striking garden birds. The song of the Blackbird is also very vocal so it does not go unnoticed.