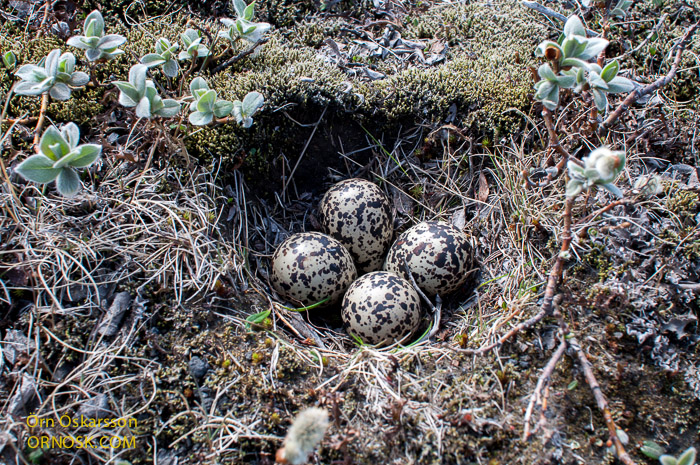 Golden Plovers have now started arriving in huge flocks.  Yesterday in Flói in South Iceland, they were in the hundreds. The Golden Plover is a migrator that goes to the British Isles for the coldest months of winter, usually leaving in October and coming back in April.

It is one of the best-loved Icelandic birds and its arrival signals the coming of spring. Its ideal habitat is dry heathland both in lowlands and highlands and the breeding population in Iceland counts around 300,000 pairs.

All over the moors chicks  can be seen – chicks of Golden Plovers, Black-tailed Godwits , Whimbrels, Redshanks, Common Snipes, Ptarmigans and more. They are all over the place, in bogs and moors. Now is the perfect time to observe nature at its most beautiful. Due to mild weather in May and June breeding and hatching went well.

Yesterday we saw Golden Plover chicks and Black-Tailed Godwit chicks in Grímsnes. They were well looked after by the parents.

Golden Plovers can be seen all over the country by now but the first migrants usually arrive from their winter grounds in the British Isles in the end of March.  They are among the best loved Icelandic birds, the migrant that signals the coming of the long awaited spring here in the North. The Plover’s favourite food is earthworm and this bird had quite a long struggle with his lunch, as can be seen in the photos. The Golden Plover can be found all over Iceland, both in lowlands and highlands. They often choose their breeding place in areas that match their own colours, like the moss in the pictures here. This pair was busy trying to divert our attention from its chicks which were running around on their long legs. This was in the Southern Interior, more precisely in Veiðivötn, Fishing Lakes.

A lot of Golden Plovers are still in urban areas, in places where we are not so used to seeing them. You can see them in home gardens and most open areas and they are often  not getting along too well. It seems that they are claiming territory and have to chase away those that come too close.

A group of around fifty Golden Plovers (Pluvialis apricaria) were in a meadow by Selfoss today. These are the first Golden Plovers here in the South but the first birds this spring were spotted in the East on March 18.

More on the Golden Plover in an earlier post.

The first news of the arrival of the Golden Plover (Pluvialis apricaria) has been issued. It is said to have been seen in Breiðdalur, in the East of Iceland, yesterday, March 18. Now spring must surely be on its way.

The Golden Plover  is probably the most loved Icelandic bird. Its arrival in the spring is looked forward to because it signals the coming of summer.

The Golden Plover (Pluvialis apricaria) is probably the most loved Icelandic bird. Its arrival in the spring is looked forward to because it signals the coming of summer. The Golden Plower is a common breeding bird and it lays its eggs in dry heathland both in lowlands and highlands.

The Golden Plower loses its black colour in the winter time and in September most of them have become almost white on the  belly.

The breeding population counts around 300,000 pairs. The Golden Plower goes to Ireland for the coldest months of winter, leaves late (October) and comes back early (April).