Once again we are in the Icelandic Highlands and the Great Northern Diver, also known as the Common Loon, has arrived in all its splendour to the breeding grounds. It has come from the sea around Iceland where most of the Icelandic stock spend the winter months.  Most of the highland lakes in Veiðivötn in the South Interior have one breeding pair and the lake is their territory. They make their nests on small islets or grass tufts in the water and the eggs are two. 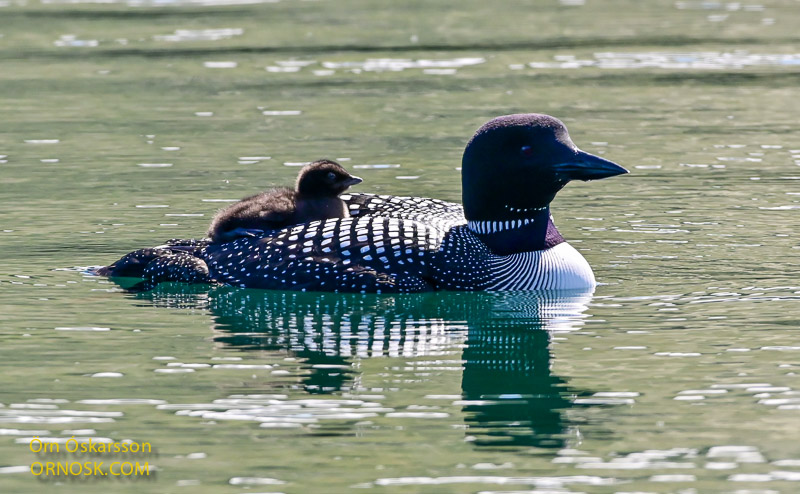 The Great Northern Diver  is a monogamous bird and the pairs stay together during the breeding time usually for many years in a row. They raise their young ones, one to two chicks, together but do not stay together during the winter. The pair defend their territory which is usually a lake, or a bay in a lake if the lake is big enough. In the event of one of them being chased away by a rival – these are usually younger males or females, the one left establishes a relationship with the new member. Most Great Northern Divers therefore have two or more mates during their lives. 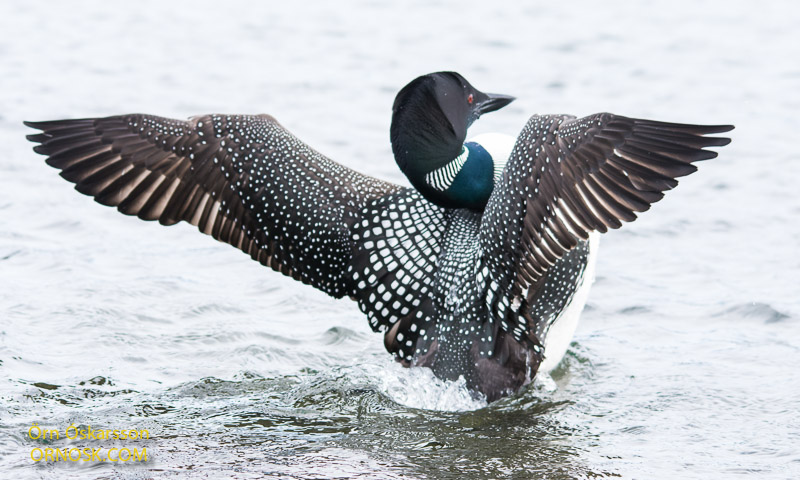 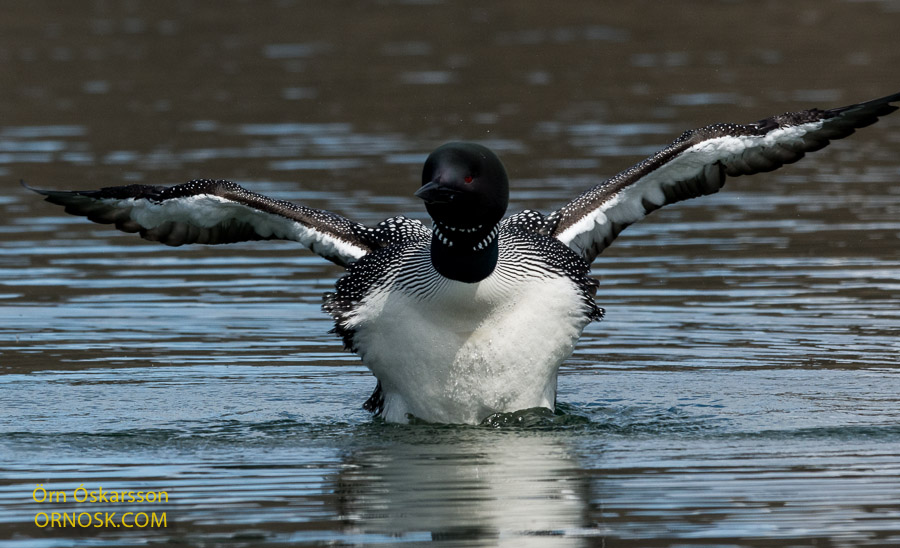 There is just one pair on each lake and the lake is their territory – no visitors allowed in breeding time. They make their nests on islands or islets, often in moss or grass, and the eggs are two.

Iceland is the only breeding place of the Great Northern Diver in Europe. In winter they stay on the sea mostly around Iceland and they lose their distinctive black and white pattern and become grey.

The Great Northern Diver is such a picturesque bird in its checkered plumage. Observing and photographing it with the offsprings in the summer is always interesting. Both parents take active part in the hatching and upbringing of the chicks which are never more two.

These photos are taken in July in Veiðivötn, South Iceland Interior.

In Þorlákshöfn harbour last weekend we saw this Great Northern Diver in a battle with something we first thought was a bird. Later we saw that it was a fish, a flatfish. This went on all about the place for some time. Eventually the Diver managed to swallow the fish whole. Not a mean feat that. By lifting up its whole body with the bill high in the air down it went. Bon appetite.

Most Icelandic Great Northern Divers stay in the ocean around the country over the winter time but a few overwinter in the UK or West Europe.  Iceland is the only breeding place of the Northern Diver in Europe with  around 300 breeding pairs here.

The Great Northern Diver breeds in Canada, Alaska, the northern regions of USA and southern Greenland but Iceland is the diver’s only habitat in Europe. In autumn  the Great Northern Diver leaves the highlands and stays in the ocean around the country until spring arrives again. The population in Iceland is believed to count less than 1000 birds. The Great Northern Diver  (Common Loon) is a very picturesque bird and interesting to photograph. We say it is the king the of the highland lakes. Veiðivötn or Fishing Lakes is a cluster of lakes in the southern interior. Ordinarily there are around 35 to 40 Great Northern Divers there over the summer time and usually 10 – 15 nests. Pairs are on most of the lakes and non-breeding birds can sometimes be seen in groups. This summer breeding went well as far as to say there are nesting pairs on most lakes. In the beginning of July the chicks hatch and we wait to see how successful the nesting will be. The Great Northern Diver is without doubt king of its habitat in the interior. Most highland lakes with fish sport at least one couple who nest there every summer and raise their young ones. Usually the chicks are two and the parents take good care of them. It is not unusual to see the chick being transported on the back of the parents.

In Veiðivötn, in English Fishing Lakes, in the southern interior the Great Northern Diver stands out. Pairs are on most of the lakes and non-breeding birds can sometimes be seen in groups.

Not many things are more captivating than the Diver’s wails which can be heard all over the place in  the stillness of the twilight. The Great Northern Diver, or Common Loon, has now  left its summer breeding grounds in highland lakes and moved to the ocean around the country. In the interior we came across a few of them but it’s already getting colder and snowing so the few that are there still  will be moving on quite soon.

The wail of the Great Northern Diver (Common Loon) is very familiar and is used unsparingly in the film industry. It is one of the top ten sound effects we all recognise from movies.  Hear it here. Movies from all over the world seem to use its call. To the ear of the birder it sounds very silly, especially when it is used in places far from the Great Northern Diver’s habitat.